The transfer of bacteria from the mother to the baby at birth is very topical at the moment. It is critical to understand the background as to why this issue is important as well as the huge gaps that exist in our knowledge of this topic, before jumping to conclusions.

Microorganisms living in and on the human body influence our health and development. Bacteria function to ferment waste products, stimulate the immune system, prevent growth of unwanted pathogenic bacteria, regulate development of the gut and produce vitamins. The gut of the fetus is believed to be sterile and transfer of bacteria from the mother to the baby occurs during birth. The incidence of Caesarean delivery has increased dramatically over the last years and this has been mirrored by an increase in the incidence of allergic and autoimmune disease. Some scientists think that the lack of maternal microorganisms transferred during a vaginal birth, could be the reason for this increased risk of allergic disease.

What is vaginal seeding? 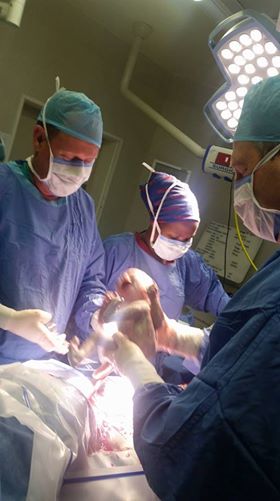 Seeding refers to the practice of rubbing vaginal fluid onto the skin of a newborn baby born by caesarean section. The intended purpose is to transfer vaginal bacteria from the mother to newborn and mimic the natural transfer of microbes from the mother that occurs during a vaginal delivery. Vaginal seeding has been reported by some to help boost a baby’s immune response and lower the chances of asthma and allergies in the infant. It is important to understand where this claim comes from and what current scientific opinion is, before coming to a conclusion.

What research has been done?

It has long been hypothesized that neonatal exposure to vaginal microorganisms at birth reduces the risk of developing allergic conditions, but this has not been proven with research. The relationship has only been suggested from retrospective studies.

It has been shown that bacteria present in breast milk and the skin of the breast nipple also contribute to the early seeding of the infant gut.

It is important to understand that the only research that has been done on comparing the gut bacteria of infants born after vaginal seeding at Caesarean section, to those born without seeding, only involved 4 babies in the seeding group out of a total of 18 babies studied. Effects upon the gut microorganisms after the first 30 days are also not known and the effects upon the long-term health of the 4 infants are also not known. It is of utmost importance to appreciate that all the mothers in this study were screened for potential harmful microorganism like Group B Streptococcus, HIV, Chlamydia and Bacterial vaginosis and had a proven normal vaginal pH confirmed in the hour before birth. This study was done to explore the theory of microbial transfer, not to look at the safety of the procedure!

What are other factors to consider?

The exposure to the mother’s vaginal bacteria will vary among infants born by caesarean section as some infants are born after the onset of labour and rupture of membranes.

There is sufficient evidence to accept that environmental factors, diet and genetic factors contribute to the risk of developing asthma. The contribution of variance in early microorganism colonization of the gut of children and the association with mode of delivery also remains unknown.

It has been shown recently that factors like the increased intake of fatty acids, as well as environmental exposures after birth can lower the risk of developing asthma.

What are the risks? 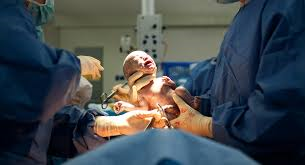 The main risk is that babies might get a serious infection. Early onset neonatal sepsis (a very serious infection) is more common in preterm babies and can be caused by the transfer of bacteria from the mother during vaginal birth. E coli and Group B streptococcus are linked to this.
It is important to understand that 20 % of pregnant women at term are carriers of group B Streptococcus. Other potential pathogens that could be transferred with seeding include Chlamydia, Gonorrhea, HPV, and Herpes. The risks of vaginal seeding in the general population therefore are unknown. The risk in preterm infants is even higher.

What do scientific bodies say?

The Danish Society for Obstetrics and Gynecology published guidelines in August 2017 where they warn that vaginal seeding has unknown risks and is not recommended.

The American Congress of Obstetricians and Gynecologists have recently published a Committee Opinion where they do not recommend or encourage vaginal seeing outside of the context of an approved research protocol. They emphasize that additional research on the safety and benefit of vaginal sending is needed.

Breastfeeding is thought to be a very safe and proven way to ensure the transfer of microorganisms a baby needs in the early months of life. Skin-to-skin contact with the mother shortly after birth can further possibly help with microbial transfer.

Posted on 3 Nov 2017 under Blog by Dr. Danie Schneider